Boots in the books: Veterans succeed at academic prep camp

“I had thought that professors are just looking to make sure you regret joining their class,” Ulloa said. “Now, I feel more comfortable in a college classroom. I don’t have to hold back on my thoughts.”

Ulloa was one of 16 military veterans who participated in the virtual academic boot camp at Cornell July 26 to Aug. 6. The university partnered with the Warrior-Scholar Project for the seventh consecutive year to help recent or soon-to-be military veterans transition into higher education.

As in years past, the veterans were immersed in academic exploration, critical thinking and writing workshops that focused on the humanities. This summer, a second week was added to focus on science, technology, engineering and mathematics (STEM).

Rather than formally lecture the class, Brian Richardson, assistant professor of law at Cornell Law School, held a Zoom session reminiscent of a late-night, dormitory bull session. He listened as the student veterans led an energetic discussion on the U.S. Constitution, the Federalist Papers and America’s founders.

“This boot camp made me realize how much I like humanities,” said participant Jeremy Anderson, who will leave the Navy in nine months. “I’ve been so disconnected from this being in the military, I can now see myself doing this all the time and I’d be happy.” 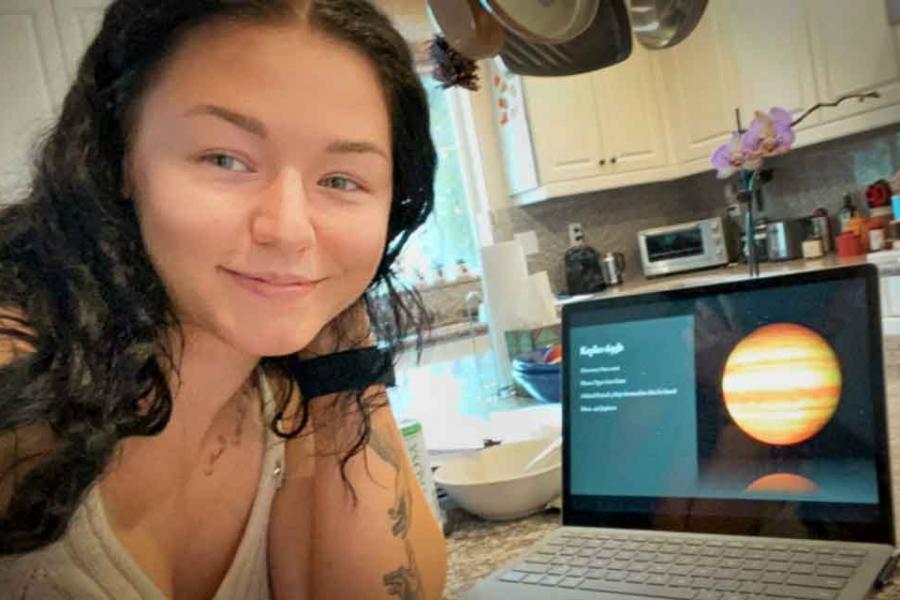 Marine veteran Lorraine Pocon Ramos enjoyed the classroom-like time with professors. “I think this experience is going to make me even more excited and eager to follow through with my goals,” she said.

“I now can structure my papers, in a way that differs from high school writing, into collegiate writing,” said David Kelly, an active-duty Marine. “It’s nice learning these kinds of tools.”

Since 2015 when the partnership began, 95 veterans have attended the Cornell academic boot camp.

For the Cornell boot camp’s second week, participants focused on physics, with biology-focused research talks. Also, the student veterans’ curiosity led them out of this world – talking about space.

Foote himself is an Army veteran and graduated from Officer Candidate School. In the service, he led an engineering group attached to a sapper unit (the group that explodes roadside bombs). Foote’s group repaired the roads.

In the first cohort of the STEM projects, the students demonstrated exoplanet movement and presented the science to an audience – in just a week’s time. Kelly, Mackenzie Williams (Marines), Corey Ford (Marines) and Ken Bingham (Navy) showed light curves and validated the complex nature of four exoplanets, much like astronomy professionals do at conferences.

Kelly tested his math chops by calculating the radius of exoplanet Kepler 424 b and compared it to the planet Jupiter. With data, pen and paper, his hand-calculated answer was .086 – a whisker off from NASA’s .089 calculation.

Clemens, who served seven years as a Navy diver at the Undersea Rescue Command in San Diego and the U.S. Naval Academy in Annapolis, Maryland, examined launch-angle data sets created by his kitten Micki – a four-month-old Cornish Rex – who leaps onto kitchen counters.

“If my cat learns complex physics, she might end up [on top of the refrigerator] or just try at some point,” Clemens said.

At the end of two weeks, the group met at a virtual reception and the Cornell and Warrior-Scholar Project partnership graduated the students. Katherine McComas, vice provost for engagement and land grant affairs – whose office coordinates with the project – let the veterans know they are appreciated.

“I hope this experience has demonstrated to you how well you would fit at Cornell,” she said, mentioning the Cornell Undergraduate Veterans Association and the new veterans residential program house opening this fall. “We are very committed to supporting our veteran students.”

The program ended with Marine veteran Mackenzie Williams thanking the organizers and teachers. The course helped her to attain “a high level of confidence … [and affirmed] my ability to not only get into these schools, but to succeed at these schools,” she said.

RT @brainpicker: On this day in 1980, Carl Sagan appeared on the cover of TIME magazine. Here he is explaining, with his characteris… https://t.co/dlz59s4kR4
3 days 17 sec ago