Nye to grads: Don’t let fear stop you from changing the world

Cornell’s Class of 2019 is entering one of the most extraordinary times in human history, William S. Nye ’77 told graduates at Senior Convocation, urging them to stay optimistic as they tackle unparalleled challenges.

“When it comes to changing the world, don’t be scared. Don’t freak out,” Nye – the educator, engineer, comedian, author and inventor better known as Bill Nye the Science Guy – told thousands of graduates and their families at Schoellkopf Field May 25. “That fear can stop you cold, but don’t let it. As we say in the theater and on television, take that fear and turn it into excitement. You’re graduates of Cornell University, for crying out loud.”

Nye blended jokes, advice, encouragement and data in a speech that touched on some of humanity’s greatest scientific breakthroughs, his own family’s brushes with history and the urgent threat of climate change and overpopulation.

“You might say it’s gotten to the point where it seems like the globe is on fire,” he said in a nod to his recent appearance on HBO’s “Last Week Tonight with John Oliver,” where he employed profanity and a blowtorch to drive home the impact of climate change. “These are scary times for everyone on Earth.”

He described his mother’s work as a code breaker during World War II, and how hers was among the efforts that helped win the war.

“Everyone in the United States, along with allied people everywhere, went to work to resolve a global conflict,” he said. “And they did! It was an extraordinary time, because everyone was scared, everyone pitched in and in five short years, they got ’er done.”

To stem climate change, the graduates need to do the same, he said.

“It’s no longer a matter of only keeping the air and water clean,” Nye said. “No. Nowadays we – by that I mean you – are going to have to steer our spaceship. Take charge of our Earth. It’s no longer a matter of just being good stewards. From now on we humans will have to deliberately control what we do to our atmosphere, our land and our seas, to ensure that we can maintain as much biodiversity as possible, while still taking care of all of us.”

If, in “Harry Potter magic wand-ical fashion,” he could make a single improvement, Nye said he would raise the standard of living for girls and women around the world. Providing women with renewable electricity, education and access to the internet can “make the world a better place for all.”

As Convocation began, the sky cleared, rain puddles on the bleachers dried and the sun shone. Nye was introduced by President Martha E. Pollack, and presented the Convocation Medallion by Charlotte Lefkovitz ’19, senior convocation chairperson. Lefkovitz thanked him for making the weekend “iconic and relevant.”

“Having a fixture of our childhood serve as our steward into postgraduate life is exciting,” she said. Andrew Semmes ’19, senior class president, delivered the Class Address.

Visible from the field was the 12-foot Solar Noon Clock atop Rhodes Hall, which Nye designed and funded in 2011.

“I had a few extraordinary experiences here at Cornell that really changed my life, and I guarantee you have had a few, too,” said Nye, who studied mechanical engineering at Cornell and served as a Frank H.T. Rhodes Visiting Professor from 2001-05.

For example, he said, he took an astronomy class taught by the late Carl Sagan. At Nye’s 10-year reunion, Sagan told him that pure science was more resonant to children than technology. “That shaped everything I did as a television performer and writer and author.”

Sagan started the Planetary Society in 1980 – just as disco was giving way to punk, Nye said – and Nye joined. Later he became a member of its board of directors and now serves as CEO.

Through his involvement with the Mars Rover Exploration Team, Nye said, three sundials were placed on the rovers reading “To those who visit here, we wish a safe journey and the joy of discovery.”

With references ranging from Isaac Newton and Charles Darwin to Ultimate Frisbee and Bruno Mars, Nye exhorted the graduates to learn from others, use critical thinking to evaluate information, and “read the label on a can of paint before you drink it.” (“That’s a joke – you don’t drink paint,” he added.)

“Cornell is just an extraordinary institution that teaches you how to think about how to interact with the world,” Nye said, “so Class of 2019, here’s wishing you excitement, optimism and the joy of discovery in everything you do. 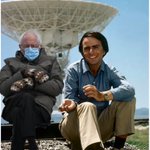 “I think many of us who are scientists, who have faith as well, feel that our faith gives us a deeper sense of appr… https://t.co/fMaHcj90aC
19 hours 47 min ago