When NASA’s 990-pound Dragonfly rotorcraft reaches the Selk crater region – the mission’s target touchdown spot – on Saturn’s moon Titan in 2034, Cornell’s Léa Bonnefoy '15 will have helped to make it a smooth landing.

Bonnefoy and her colleagues assisted the future arrival by characterizing the equatorial, hummocky, knoll-like landscape by combining and analyzing all of the radar images of the area acquired by the Cassini spacecraft during its historic 13 year exploration of the Saturn system. They used radar reflectivity and angled shadows to determine the properties of the surface.

The research, “Composition, Roughness, and Topography from Radar Backscatter at Selk Crater, the Dragonfly Landing Site,” was published Aug. 30 in The Planetary Science Journal.

“Dragonfly – the first flying machine for a world in the outer solar system – is going to a scientifically remarkable area,” said Bonnefoy, a postdoctoral researcher in the group of Alex Hayes ’03, M.Eng. ’03, associate professor of astronomy in the College of Arts and Sciences and a member of the Carl Sagan Institute.

“Dragonfly will land in an equatorial, dry region of Titan – a frigid, thick-atmosphere, hydrocarbon world,” Bonnefoy said. “It rains liquid methane sometimes, but it is more like a desert on Earth – where you have dunes, some little mountains and an impact crater. We’re looking closely at the landing site, its structure and surface. To do that, we’re examining radar images from the Cassini-Huygens mission, looking at how radar signal changes from different viewing angles.”

“The radar images we have of Titan through Cassini have a best-resolution of about 300 meters per pixel, about the size of a football field and we have only seen less than 10% of the surface at that scale,” Bonnefoy said, “This means there are probably a lot of small rivers and landscapes that we couldn’t see.”

Early in the Cassini mission, in January 2005, the spacecraft sidekick Huygens probe landed on the Earth-like environment of Titan in a two-hour descent, sending back pictures of river valleys that are invisible in the radar images.

Bonnefoy and the group used the radar images to map six terrains at the site, characterizing the landscape and gauging the rim height of Selk crater. Knowing the shape of the crater helps both to understand the region’s geology and assess expectations for Dragonfly's exploration.

NASA’s Dragonfly mission is scheduled to launch in 2027 and arriving at Titan in 2034 for a three-year mission. The spacecraft weighs a whisker under 1,000 pounds and its final design will look like a military transport helicopter.

Titan’s heavens – mostly nitrogen, with a dash of methane and four times denser than Earth’s atmosphere – enables Dragonfly (the size of a very small car) to perform like a drone, carrying out research in chemical composition and astrobiology to understand that planet’s make-up and how life on Earth may have emerged.

“Over the next several years, we are going to see a lot of attention paid to the Selk crater region,” Hayes said. “Lea’s work provides a solid foundation upon which to start building models and making predictions for Dragonfly to test when it explores the area in the mid-2030s.”

As a planetary scientist, Bonnefoy is ready to explore this large moon: “Dragonfly is going to finally show us what the region – and Titan – looks like.”

The research was funded by the Habitability of Hydrocarbon Worlds: Titan and Beyond/NASA Astrobiology Institute and the Centre National d’Etudes Spatiales. 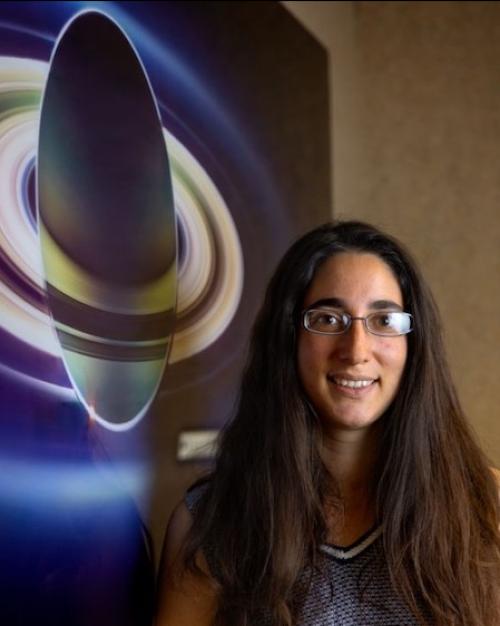 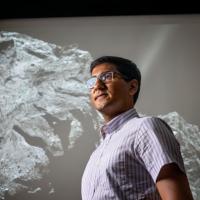 Cornell scientists show how terrain evolves on an icy comet